Ever since I picked up a copy of the Sky Observer's Guide shortly after I became interested in astronomy back in 1968, I have wanted my own observatory.  The few photos in that small Golden Guide book showed a domed building, another with a roll-off roof, as well as Clarence Custer's mammoth 12.5-inch backyard reflector.  That was enough to whet my appetite.

That boyhood dream became a reality in the summer of 2004, as I constructed a shelter and deck for my 18-inch Starsplitter reflector.  I decided to temper those dreams of domes and roll-off roofs, and instead build something that would be possible given my limited talent as a carpenter.  I decided to place the telescope on a concrete pad, which would be surrounded by a wooden deck.  The telescope itself would be covered by a minimalist shelter that would be mounted on casters.  The end result is a "roll-away observatory."  Rather than roll the roof off the telescope, the entire building moves. 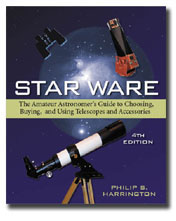 Now, where I live on Long Island has great horizons in all directions (I call it "Long Island prairie"), since my house is on the site of a former nursery.  Nary a tree to be found.  But that blessing is actually a double-edged sword, since neighborhood lighting from surrounding homes shines through unabated.  We have also discovered that we live in a sort of mini-wind tunnel, especially in the winter.  To combat both, the deck and shelter would have to be surrounded by wooden stockade fence.

The observatory has been occupied and in use since early August 2004.  Here is a photo essay showing construction along the way.  Complete plans and construction details are now available in the 4th edition of Star Ware.

Thanks for your interest,